What is the Foresight Field?

Foresight, also known as futures studies and futurology, is the art and process of looking to the future. Our oldest written forms of foresight thinking include both political propaganda, like the Prophecy of Neferti (1960 BCE) in Ancient Egypt, and social and religious prophecy, including the Delphic oracle of Ancient Greece (1400 BCE to 395 CE), and scores of religious prophets since that time in Greek, Etruscan, Roman, Zoroastrian, Judaic, Christian, Islamic, Hindu, Confucian, and more recent religions. Both Judaism (~50 named prophets) and Christianity (~60 prophets) are particularly prophetic, though Islam (~25 prophets) also makes many scriptural future statements. In 2010, over 50% of the world’s people were either Christian (31%) or Muslim (23%) by affiliation. The question of how literally or figuratively believers take these prophecies is thus no small issue for our common human culture.

Another very old form of foresight is utopianism, or secular aspirational political philosophy. We see this kind of foresight in Greece in Plato’s The Republic (380BCE), in Europe in Thomas More’s Utopia (1516), and in the writings of many more recent utopian philosophers and political theorists, from Karl Marx to Mao Zedong. While political propaganda, social and religious prophecy, and utopian foresight have been central to human development, and each influences our values and aspirations today, none of these are major subjects of this Guide.

We are mainly concerned with secular foresight, a way of thinking that began in the European Enlightenment (1650-1840), and which uses not only visionary aspiration (which we find in propaganda, prophecy and utopianism) but also intuition, reason, evidence, discourse, critique, and experiment to guide our individual and collective values determination, analysis, strategy, goalsetting, planning, and action. We will most carefully focus on strategic foresight, a set of increasingly future-adaptive practices that emerged with the start of the modern foresight field in the mid-1940s.

As its name implies, strategic foresight is futures thinking and methods that seek to create or alter our strategies, goals, plans and actions. Strategic foresight is what we are referring to when we use the term foresight in this Guide. This kind of foresight uses skills like environmental intelligence, forecasts, alternative futures exploration, visioning, strategizing, analysis, and feedback to produce or alter individual or organizational strategies, goals, plans, and actions. If your futures thinking doesn’t seek to create or alter strategy and its dependents, then it may be imagination, entertainment, or even education, but it isn’t strategic foresight.

Color Legend for the Three Primary Foresight Types in this Guide

As the color legend explains in How to Read The Foresight Guide, the Guide focuses on building your skills in three primary types of strategic foresight, uncovering and guiding probable, possible, and preferable futures. We will occasionally display these foresight types in three primary colors, blue, green, and purple in the text (see picture right) to help you remember that these are three distinctive types of foresight that are often in tension with each other, pulling toward different ends. We’ll also use red for header titles and for important concepts, and gold for any of the twenty specialties that are most useful in organizational foresight. That adds up to five different colors that we will use occasionally for emphasis in the Guide.

Some foresight work involves discovering probable processes and destinations, places we are likely to go regardless of what we individually want, because of the known and unknown laws, conditions, and constraints of the universe and our environment. Thinking about such apparently predictable aspects of the future, and attaching a quantitative probability to their arrival, either rough or precise, is engaging in future (singular) studies, one of the original phrases describing our field. This kind of probabilistic thinking will also be called developmental foresight in this Guide, and we’ll occasionally color it blue, to remind us of its presence.

For examples of coming social and technological developments, it is an easy prediction that scientific knowledge will continue to get more specific, explanatory, and powerful. We’ll also clearly keep moving more of our human intelligence and abilities to our computers, and our planet will become increasingly digital, connected, information-rich, and simulated by machines. Global technological change, wealth production, and business activity will all continue to accelerate, as they have predictably since the birth of civilization.

Until we learn how to change our biology to be like the handful of organisms that don’t age, a problem clearly beyond medical science for the forseeable future, people will continue to predictably age, die, and have children. Yet the rate at which we produce biological children, as our societies get ever wealthier, will continue its sixty year decline, and we’ll hit Peak Population sometime near the middle of this century. Many of our population- and technology-dependent problems, like pollution and species loss, will also peak during this decade, though exactly when, and after how much more environmental damage, is not so easy to predict.

It also seems highly likely that within the next human generation, we will begin to have digital aspects of ourselves “uploaded” into our machines. Many of us will soon be using neural-network based software called personal AIs (PAIs) software that can learn, and that has an increasingly useful model of our values, preferences, and goals. We’ll explore PAIs in Chapter 8. While PAIs will be feel creepy and be avoided at first by some of us, others will happily embrace and train and these digital assistants to help us better navigate the world. Increasingly, we’ll come to view those digital assistants as the fastest-learning, always-improving aspects of ourselves. All of these are quite probable developments that I think we can expect in our common future.

The (Possible and Preferable) Futures 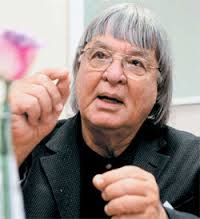 Another equally important early term for foresight work, futures studies, and its shorthand, futures, emerged and peaked in the 1980s. One of its leading proponents is Jim Dator, the recently retired founder of the U. Hawaii MA and PhD program in Alternative Futures. Use of the plural term emphasizes that our future always brings unpredictable new possibilities, options, uncertainties, and a plurality of differences. Thinking about largely unpredictable futures will be also called evolutionary foresight in this Guide, and occasionally colored green to remind us of its presence.

Unfortunately, many amateur future thinkers argue over whether there is “one future” or “many futures” ahead. But when we think carefully about it, we realize that both perspectives are always true, for various processes and contexts, in any complex system we study. Furthermore, for living systems, which have intelligence, there is always a third basic foresight type to consider, preferable futures, that we will discuss shortly.

At any point in time, certain processes are predictably converging developmentally to one common future (for example, we know the future motion of the planets, and barring a planet-wide catastrophe, we know that or near-future world will be home to exponentially more digital information and devices). Meanwhile, a much larger set of processes and events are unpredictably diverging evolutionarily to several different futures. A more useful question, then, is to ask how we can better determine what is predictable and what is unpredictable for the process, event, or system in question. Our achievable preferable futures, in turn, must always exist within the constraints of what the probable and the possible will allow.

To recap, the term futures is commonly used to highlight divergent options and alternatives, and for future-related content (thinking, artifacts, stories, models, studies, and research) that highlights the diversity of our creative choices and future outcomes. It is also used for preferable futures (that third type, which we will often color purple in this guide) when we want to emphasize the diversity of preferences that people have on any organizational or social issue.

The term future is often used for content that focuses on a specific expected (probable) future (eg, the sun will rise tomorrow), and when we want to emphasize a single preferred future that most or everyone has (eg, the continued survival of humanity). The term foresight refers to strategic foresight, the content and methods we use to alter our present strategies, plans and actions. To do this well, strategic foresight must account for the relevant probabilities, possibilities, and preferences affecting the issues in question. While we usually think of strategic foresight in terms of organizations, it also occurs in personal, global (social), and universal (science, world view) domains. As we’ll see, different personalities are often attracted to work on each of these three basic foresight types, and these four foresight domains. All are fundamentally important to creating a better future, and better futures. 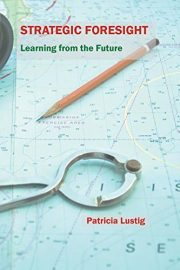 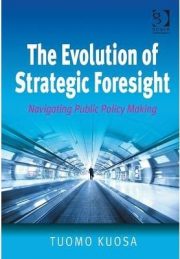 A good brief intro to the possible and preferable domains of strategic foresight, written for organizational leaders, is Patricia Lustig’s Strategic Foresight (2015). A great deeper intro to our field is Tuomo Kuosa’s The Evolution of Strategic Foresight (2012). It is an excellent (but at $150, indefensibly expensive) look at the growth of strategic foresight from its 1940’s roots in defense and intelligence to its modern forms, now including business, public policy, urban, and institutional foresight. It’s main focus is on governmental foresight and public policy. As a bonus, it is one of the rare foresight books that takes evolutionary approach. Kuosa’s subsequent book, Towards Strategic Intelligence (2014, offered in free PDF) is a great followup, focused on the intersection of intelligence and foresight.

Unfortunately, most books on strategic foresight, including these, lose a few points in their current versions because they don’t write nearly enough about the probable (developmental) future. They don’t remind us of obvious long-term and large-scale predictable global and social trends, many of which are accelerating, that will impact all our strategy-making should they continue to accelerate. We’ll address that topic in Chapter 7, and some of its most important implications in Chapter 8.

A few books on strategic foresight even try to define away prediction and forecasting, as “not part of our field.” That is a major mistake, as it leads such authors to miss the highly probable processes and forces that we can expect to constrain the possible and the preferable. One of the most obvious and important probable futures, as we will discuss, is the continuation of accelerating scientific, technical, economic and (certain forms of) societal change.

Each of us sees pieces of the future, and of foresight practice, particularly well, and other pieces less well. To be the best foresight practitioners we can be, we want to regularly read books from and engage professionally with the whole variety of folks who are serious about looking to the future(s), and learn as much from each of them as we can.

Everyone gets to see a different piece of the elephant. By comparing all our unique views, we can all see better and go farther than we ever have before.