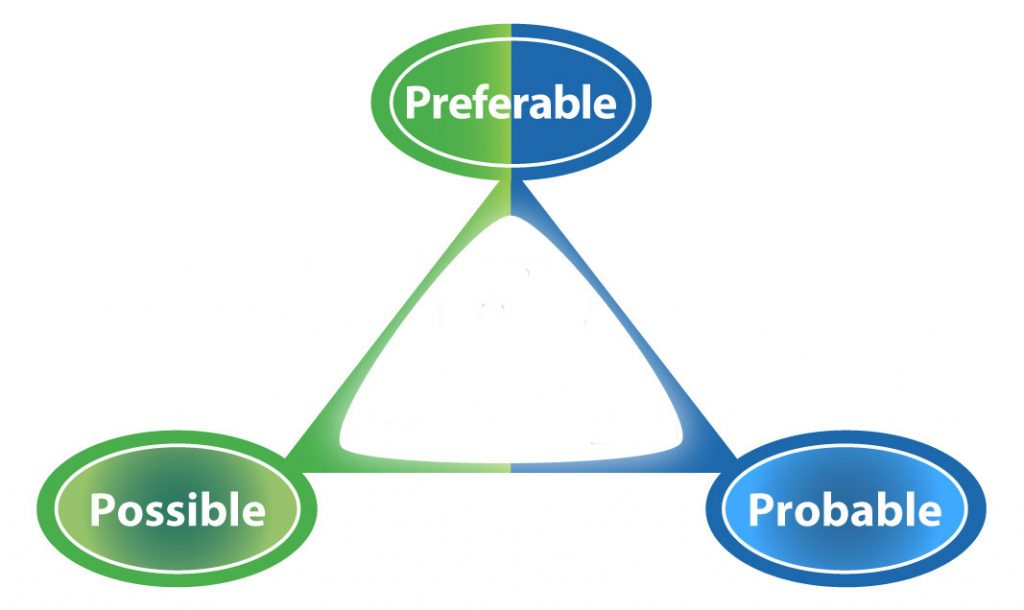 Recall the Three Ps foresight model (above), which we introduced in Chapter 1. We will now see why this model is grounded in apparently universal processes of adaptation, and can be used not only for how foresight is produced in biological and social systems but for any complex adaptive system. 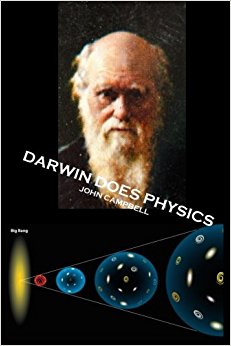 An excellent book that explains why possibility, probability, and preference processes are universal is the EDU-affiliated scholar John Campbell’s Darwin Does Physics (2015). Campbell describes how all complex adaptive systems, from quantum wave functions to brains to science processes to the cosmos itself, can be understood as physical systems that encode models of themselves and their environment, and which undergo constant selection to improve the accuracy and usefulness of those models. Campbell reminds us that Shannon’s information theory is a measure of the ignorance (surprise-potential) of our models. Knowledge, by contrast, involves accurate (surprise-free) prediction of events, and its mathematics is Bayesian inference, models based on conditional probabilities, which are continually updated with new information.

Campbell calls his perspective Universal Darwinism. This is a good description for how the universe works if we focus on the selection (adaptation) aspect of knowledge accumulation, but in my view Universal Evolutionary Development is an even more useful description, as it forces us to think about all three aspects of physical change: evolution, development, and adaptation.

The fundamental processes that influence both change and knowledge accumulation in our universe are the possible physical states of a system (evolutionary options), the probable future states, whether anyone knows them or not (developmental option-reductions), and the (evo devo) adaptiveness of the model states (preferences) of all complex systems, as they interact with each other in the world.

Understanding the universe doesn’t get any simpler than this, in my view, and I highly recommend Campbell’s book if you are interested in how our physical, biological, and social sciences must continue to converge around issues of modeling, knowledge accumulation, and adaptation in coming years. EDU scholar Michael Price has published a nice short interview with John Campbell, Why Physics Needs Darwin (2017) which you might also enjoy.

For foresight professionals, the key takeaways from the Evo Devo Foresight model is that our world is made up of a mix of unpredictable, tree-like, and predictable, funnel-like processes that interact to create the adaptive landscapes (preference maps) we observe all around us. The model also offers us some useful graphical aids (trees, funnels, and selection peaks) which we see in the diagram at right. 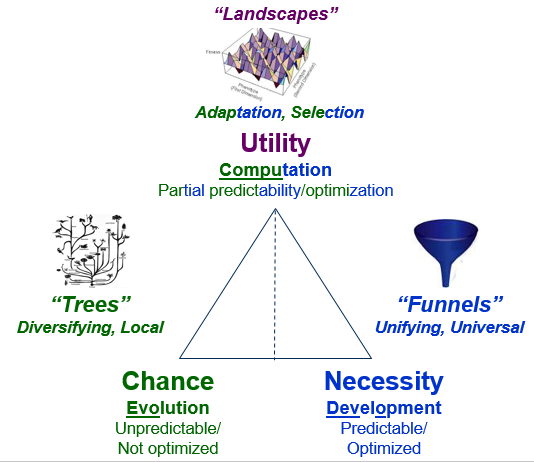 We can understand the world as a privileged set of competing and cooperating peaks (high fitness configurations) and a minefield of threatening valleys (low fitness configurations). As foresight professionals, it is our job to continually track and rebuild useful preference maps, and to help our clients find and steer toward the peaks while avoiding the valleys. Adapting well is a worthy and ceaseless challenge, and is much easier discussed in abstract than done in reality. We wish you well in that work.

Recall that Aristotle (350 BCE) championed the universality of these three perspectives, in his model of human intellect as a mix of the theoretical, or truth-associated, the productive, or beauty-associated, and the practical, or goodness-associated categories of mind. The 95/5 rule lets us reorder Aristotle’s three values as “beauty, truth, and goodness” (evo, devo, evo devo). Beauty is aways far more plentiful, and much easier to see, than truth. Goodness, in turn, is always a judicious mix of both beauty and truth.

Evolution’s mandate is to unpredictably fan out into perennial new diversity and variety. It produces a natural world of astonishing beauty. Development’s mandate is to predictably funnel all this chaos to a small set of predictable futures, invariant truths, expressed as critical informational or physical structures and functions will emerge, at developmentally appropriate times, in all corners of the universe. Evo devo’s mandate is to combine these two processes to create local adaptiveness, some of which will turn out to be universally adaptive as well.

This is a good time to point out that evolutionary development is nothing like Aristotle’s scala naturae (Ladder of Nature, Great Chain of Being), model of life, where all the important processes are predestined by a Creator into a strict hierarchy of emergence. In the evo devo model, a 5%  developmental framework of universal complexification is statistically

Nor is an evo devo universe a Newtonian or Laplacian “clockwork universe” model, which proposes total physical predetermination, though it is a model with some statistically clockwork-like features, including the timing of various hierarchical emergences over the universe’s lifespan and death, just as we see in biological development. Neither the Aristotelian nor Laplacian models of the universe are developmental (positing statistically predetermined emergence and lifecycles) but rather caricatures of it, one-sided models that allow no room or role for evolution.predetermined to emerge. But that framework says nothing about the creative 95% evolutionary painting itself, which is the bulk of the work of art. Recall the all-important differences in tissue microarchitecture and mental processes and life choices between two genetically (developmentally) identical twins. Evolution is as or more important to adaptiveness as development, and evolution is far more of what we see.

In evolutionary development, the Universe is not just a Ladder of Nature (above) or a Random Experiment (standard evolutionary theory) but some useful combination of the two simpler models.

It appears that our universe is significantly more complex, intelligent, resilient, and interesting than any of these models suppose – it is predictable, constrained, and conservative in certain critical parts that are necessary for its function and replication, and it is intrinsically unpredictable and creative in all the rest of its parts. Furthermore, unpredictable evolution and predictable development may be constrained to work together in ways that maximize intelligence and adaptation, both for leading-edge systems, and for the universe as a system.Nor is an evo devo universe the random, deaf-and-dumb Blind Tinkerer that universal evolutionists like Richard Dawkins (The Blind Watchmaker, 1996) portray. Blind Tinkerer models misunderstand convergent evolution, and are as incomplete in describing universal change as neo-Darwinian theory is in describing biological change today.

If we live in an evo devo universe, it must be statistically near-impossible for Earth-like civilizations to not invent critical adaptive technologies like language, electricity, internal combustion engines, factories, computers, mobile phones, and soon, human-surpassing AI. But what is entirely within our choice is the path we take to and beyond each of these developmental destinations.

Evo devo models can be applied to the universe as a system, and to any of its replicating internal complex systems, including stars, molecules, organisms, behaviors, ideas, algorithms, and technologies. In an evo devo universe, our greatest moral responsibility lies both in foreseeing these predictable destinations (anticipation) and in creating (innovation) and choosing (management) good social, organizational, and personal paths among all the unpredictable futures in front of us.