What is foresight concerned with, in its simplest definition?

The graphic below summarizes it as Two Questions, each of which includes two goals, giving us a total of Four Goals (objectives, tasks, duties) of good foresight work.

The Two Questions answer the “Why”, of foresight thinking and practice. They tell us why we must do it, as well as we can, as individuals, teams, organizations, and societies.

The first question we use foresight to answer is:

The second question we use foresight to answer is:

The Four Goals summarize the “What”of foresight thinking and practice. They tell us what the questions require us to pay attention to, as goals of our practice.

The Four Goals of Foresight make an acronym, RODA, that we will refer to when helpful in the Guide. In US government practice, a Record of Decision or Agreement (RODA) is a public document that records a decision made by a governing body, or an agreement between public actors, that is relevant to the public interest. That is a convenient coincidence, as seeing RODA is the fundamental job of all foresight work, a job that is certainly in the public interest. 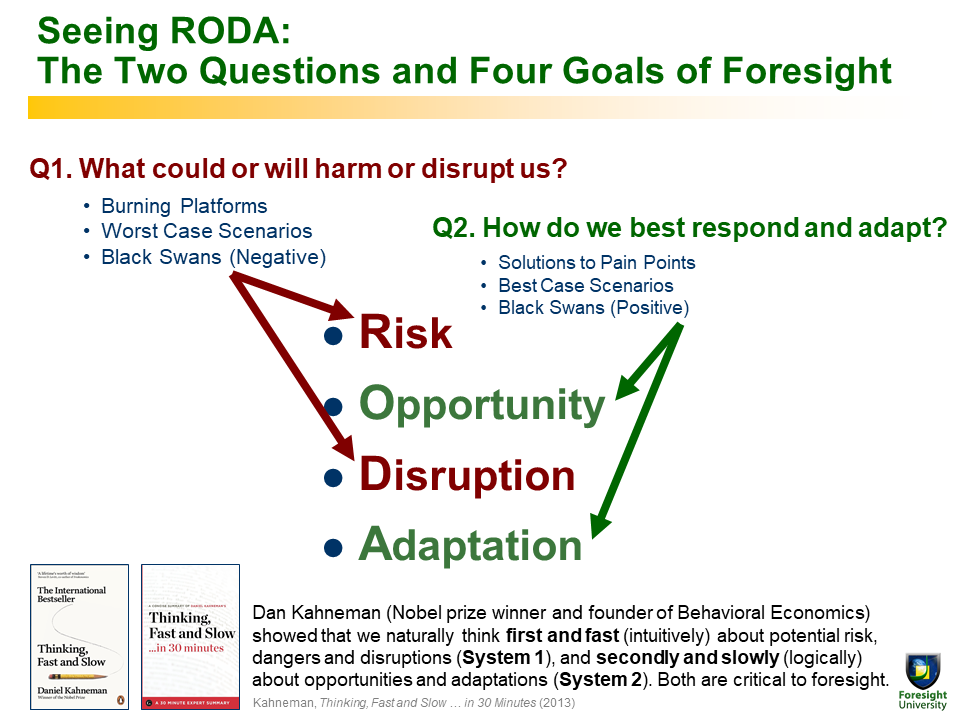 As we’ll see in later in this chapter, in the work of Dilip Jeste, people who have an inclination to defensive pessimism, and folks are are protectors and predictors, have a useful inclination to go deeper in imagining to Risk and Disruption. People who are more inclined to strategic optimism, and folks who are experimenters and innovators, naturally gravitate to Opportunity and Adaptation. Both kinds of thinking, and both kinds of minds, are critical to good foresight production.

Alternating sequences, cycles (the  Do loop), and several other patterns we’ll see later (positive and negative feedback, thresholds, differentiation, integration) are processes we find in all living systems. We are in search of the most universal and biologically-based models of thinking, foresight, action, and adaptation we can offer you in this Guide.