These individuals primarily see themselves as foresight experimenters or innovators, exploring, collecting, or producing alternative or possible futures. On the Kirton Adaption-Innovation (KAI) test, creatives are Innovators. They are drawn to freedom, imagination, experimentation, exploration, and novelty. They often also enjoy taking risks, at least small ones, and breaking or at least bending the rules. They can be either extroverted or introverted, and are usually more intuitive than analytical. They are less motivated by discovering the expected future, or advancing or following social or organizational preferences, than in the act of exploring the possible, and in the process creating something interesting, useful, or new. 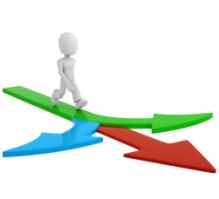 Creatives tend to be qualitative, freedom-oriented, intuitive, and individualistic. They are seekers of diversity and alternatives. They may also have a history of playing fast and loose with the facts (or not, depending on their character), and being interesting, sometimes indispensably so, as when they produce a brilliant new strategy or idea, but often wrong, or at least imprecise. Think of pop futurists, performance artists, novelty and trendhunters, and science fiction authors. They tend to be found in design, marketing, or R&D, less commonly in the boardroom. They may occasionally seek to lead, but more commonly seek to inspire, and generate options.

Creatives can be found in any industry or function, but they particularly like industries and functions where they have a lot of freedom and can exercise their imagination and creative control. Speaking, writing, film, website, and other media work are common outlets for creatives. Design, sales and marketing can also provide great work environments, as can law, finance, or strategy for new or risky activities. Many creatives like research and development, innovating new products, processes, and services, or entrepreneurship, and they generally approach these activities from a risk-taking, exploration, or experimentation mindset.