The 95/5 Rule: Most Change Looks Evolutionary

The reason the evolutionist, chaos, and random accident perspectives have been so dominant in society for so long, in my estimation, is because of a fundamental property of evo devo systems that we will now consider. Nearly all, or roughly 95%, to a first approximation, of the pathways, decisions or events that occur in complex systems in our environment are bottom-up, evolutionary processes that, though they may probabilistically predictable with respect to the next path, decision, or event, are so contingent and creative that they rapidly become unpredictable in the medium and longer term. Only a critical subset, 5% or less, are top-down, hierarchical, developmental processes. These processes, by contrast, are convergent and conservative, and intrinsically future predictable, even over the long term. We can call this a 95/5 (or 97/3, 99/1, or other similar) rule, for different processes. We will stick with the name 95/5 rule for now, until evo devo processes have been much better measured and quantified in a variety of complex systems. 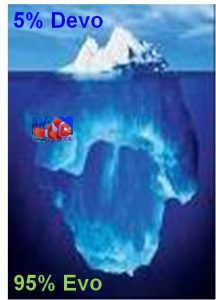 Why the 95/5 rule exists is obvious, if you think about how evolution and development work as we have defined them. Evolutionary processes constantly branch, or fan out, in a “bottom-up” way, as each species/system tries to adapt by trying lots of local creative experiments, which are often generated based on their local contexts. Think of all the things you do in a typical day that happen only because of the environment you find yourself in, or the information you’ve just seen or heard. Only a few of these evolutionary experiments are destined fall into funnels, special configurations that will predictably reach higher levels of complexity. These special branches are guided “top-down” to these higher levels due to the special initial conditions and laws of the universal environment, and the way those conditions and laws have been tuned for future-specific form and function via many previous cyclings of the system (in living systems and the universe as a system).

A good way to remember this rule is the Foresight Iceberg schematic, pictured at right. In evo devo systems, only a small percent of change can be long-term “visible” to foresight professionals, in that it is intrinsically predictable, convergent, and constrained or driven top-down by a few fundamental rules and actors. The vast majority of change is submerged, and significantly harder to predict, except in the short term, or in broad statistical ways, because it happens bottom-up and collectively via the creative action of a vast number of local actors, in interacting in contingent and increasingly divergent ways.

We can see this 95/5 rule operating in complex systems of all types.

The generic value of a 95/5 rule in building and maintaining intelligent systems, if one exists, would explain why the vast majority of universal change appears to be bottom-up driven, evolutionary and unpredictable in complex systems, what systems theorist Kevin Kelly described as “out of control” in his prescient work Out of Control (1994). Yet a critical subset of events and processes in all these systems also appears to be top-down/systemically directed, developmental, and intrinsically predictable, if you have the right theory, computational resources, and data. Discovering that developmental subset, and differentiating it from the much larger evolutionary subset, will make our world vastly more understandable, and show how it is constrained to certain future destinies, even as creativity and experimentation keep growing within all the evolutionary domains.

Fortunately, as our science and computing abilities advance, theories of universal evolution and development will be deeply tested, and proven or falsified, by simulation. For now, you must use your own knowledge and intuition to ask whether the hypothesis makes sense. Science is a long way from being able to verify or refute it, or any alternative. We can only cite evidence and argument.