Fortunately, these and other developmentalist hypotheses can increasingly be tested by prediction validation, as our predictive analytics and crowd foresight platforms emerge, and once we have enough causal information, also by computer simulation, as our computing technology, historical data, and scientific theory get progressively better. Run the universe simulation multiple times, and anything that appears environmentally dominant time and again, and any immunity that we see (statistical protection of accelerating complexity), is developmental. The rest is creative and evolutionary. 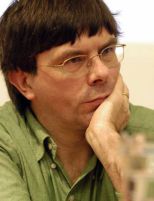 Simon Conway Morris –
A leading evolutionary developmentalist (though he might not use that term).

A number of careful scientists, including the paleontologist Simon Conway Morris in Life’s Solution (2001) and The Deep Structure of Biology (2008) have proposed that humanity’s most advanced features, including our morality, emotions, and tool use, have all been independently discovered, to varying degrees, in other vertebrate and invertebrate species on Earth. According to Conway-Morris, if something catastrophic happened to Homo sapiens on Earth, it seems highly probable that another species would very quickly emerge to become the dominant “human” tool-users in our place. Our pathway to and our subtype of humanity may be special and unique, but our humanity itself, in many of its key features, seems to be a product of the universe, far more than a product of our own free choice. What’s more, local runaway complexification seems well-protected, statistically speaking, by the universe. It has many portal paths leading evolutionary processes toward complex forms like ours.

Testing the Five Goals and Ten Values and other values/goals models for social systems will be even more challenging than the more basic idea of evo devo, as these derivative concepts will need much more careful definition, critique, and quantitation for them to become more widely accepted.

Our simple models are also surely quite wrong in many particulars. But if they are at least usefully wrong, as the physicist and quark-discoverer Murray Gell-Mann would ask, wrong in ways we can learn from, and if they are also just a bit better than what we’ve been using so far, then we will have the pleasure of watching our species’ general foresight and adaptiveness grow.