This brings us to Scriptural futurism, by far the largest of the problematic types, and one of the most controversial in some cultures, so we address it last.  Scripture in the major world’s religions is a fusion of ancient forms of evidence, argument, belief, ideological dogmatism, and finally, utopianism, with the utopia always tucked away in another, unobservable place and time.

Belief in a higher power, in God, belief that human beings can be made better, and saved from themselves, and belief that there are better and worse ways of thinking and living, has done a lot of good in the world. Much evil has been done too. Scriptures can be considered our first science, and I would argue that on balance, they have generally been a major net good force in the world. But the problem with all scriptures is they don’t change much over time, even as the world changes.

Belief in any one religion’s scriptural literalism, inerrancy and infallibility is one of the most obvious mistakes of belief that must be recognized. Unlike religious institutions and communities, religious scripture itself very rarely is reformed. It becomes increasingly unaware of universal truths as science unveils them. Therefore, addressing inadequacies of scripture and scripture-driven behavior within all our religious communities as we perceive them, without attacking the communities themselves, seems very useful and convergent foresight work. By such criticism we can help our religious communities reform, and avoid the dangers of being a scriptural futurist.

Faith has always been our bedrock in all domains where good theory and evidence have yet to tread. But as science continues its accelerating advance, faith-based domains grow more specialized with every generation. Since the Enlightenment, humanity knows enough about the world that most of our intuition can now come primarily from reason and evidence, and only secondarily from faith. For most of humanity’s two million year history, prior to complex language, we can assume a practical, experience-based way of thinking, and personal faiths, were the dominant view of the world. We must have had a variety of personal spiritual faiths, but without complex language, we did not have the tools to enforce our spiritual beliefs on others.

But as our languages expanded and formalized, and we moved from tribes to civilizations, our stories of how the world works got ever more competitive and elaborate. It became increasingly important for us to formalize our faith in things unseen, just as we were formalizing our evidence for things we could directly observe. Competitions for dominance in our faiths led to a few versions of our faith stories becoming the single accepted truth in our social groups. Recall our discussion of social dominance, a proposed sixth basic personality trait, in Chapter 2. These stories, told orally and later in writing, eventually became our scriptures, our sacred texts.

Scripture-based faith reached its pinnacle of sophistication between one to three millennia ago around the world, when many of our major religions emerged and fused with state power in empires and monarchies. Many then began a series of warlike crusades and purifying inquisitions which are still being felt around the world today.

In many ways, the newly complex, expertly-produced, and carefully edited and re-edited religious scriptures of these faiths were our first “science”. Religious writings seem likely to appear on all planets with thinking beings, long before science itself can emerge. The best of these texts, carefully edited by religious elders, soon become great collections of wisdom and proverbs, offering concrete solutions to many of the greatest metaphysical questions.

But no matter how many good ideas are collected by the early builders of scriptures, they become increasingly outmoded if they are not continually edited and updated, in the way that science is updated. Without constant editing and evidence-testing of our religious texts, what begins as a general search for spiritual insight and useful faiths about the future and our place in the world inevitably becomes a rigid set of “truths” we accept without criticism, and whose certainty encourages us to exclude others who do not share our particular world view. 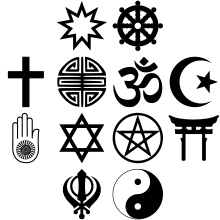 Our Global Religious Beliefs Increasingly
Conform to Science and Evidence

If we are Christians, Muslims, Hindus, or practitioners of any other religion, and we are also foresight professionals, one key question we must ask ourselves is whether we believe our scriptures are the literal word of God, or the carefully edited philosophy of well-meaning people, offered in an attempt to guide us toward more divine thought and action. The answer you give to such a question will define you as either a scriptural or spiritual futurist.

It is my belief that we need more of the latter and steadily less of the former in all modern religious communities. As we know, scriptural futurists, due to their literalism, and their belief that their particular scripture is the only true word of God can often be trapped in a variety of extreme and intolerant beliefs, including beliefs in the damnation of others who do not believe as they do, and in such future events as a coming Apocalypse (Christianity), New Caliphate (Islam), or a 5,000 year Golden Age (Hinduism). In a world of accelerating technological capability, we increasingly can’t afford the dogma and intolerance of the scriptural futurist.

By believing they have the one true set of answers to faith-based questions, and the one true source for those answers, literal scriptural futurists see false certainties and narrow their world view. They stop debating the great scientific and spiritual questions that we should all humbly wrestle with our entire lives. They engage in tribalism, defining belief-based in-groups, clearly delineating who is in the “out-group.”

The tribalism that arises in any scripturally-literal approach to religion also makes us less charitable to others. A recent major study of 1,200 children globally, from Christian, Muslim, and non-religious households, run by researchers from seven universities, concluded that dogmatic religious belief has a negative effect on children’s altruism. (Negative Association Between Religiousness and Children’s Altruism Across the World, Current Biology, 2015). This study is enlightening as it measures the effect of dogmatic belief on the individual child, before they later engage in charitable work as members of their church.

But we must also acknowledge that many religious groups have had a greater total charitable effect on the world than secular groups (excluding states), at least in the last century, and religious groups may continue to lead charitable work for the forseeable future. So the above study should not be taken as an indictment of religion as an institution, but rather of a certain type of literalist religious belief, and a focus on the belief over the community.

Fortunately, all our leading religions have also become increasingly less literal in recent centuries. The earliest documented use of the word futurist in the Oxford English Dictionary begins in 1842, referring to Christian scriptural futurists. Such individuals had a far more literal interpretation of scripture than most Christians today, and the reform of most Christian communities away from many varieties of literalism has been a major positive social development.