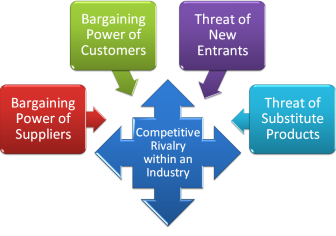 Over the last thirty years business scholar Michael Porter has developed a popular Five Forces market analysis model for determining when a firm can be expected to achieve a profit in excess of the industry average. With his publication of Competitive Strategy: Techniques for Analyzing Industries and Competitors in 1980, Porter’s model became a widely used competitive intelligence and strategy tool.

Porter considers the intensity of competitive rivalry as the key force (factor) determining profitability, so this category is typically placed at the center of his model. The probability of new entrants is then assessed as an impact on future rivalry. How high are the barriers to entry? The probability of substitute products or services is assessed to determine who the competitors are (e.g. does more tea drinking cut coffee drinking, or are tea and coffee drinkers in different demographics?). The bargaining power of inputs suppliers (labor, raw materials, services) and of outputs consumers (customers, buyers) are also assessed as the last two core factors. Scholars have proposed other factors, including the threat of government regulation and the actions of strategic partners as very important to profitability for specific industries and firms, but Porter makes a reasonable argument that these are usually less central than core five.

The Five Forces model has a bit of a Machiavellian flavor, as it argues convincingly that profit-maximizing corporate leaders should constantly be seeking ways to make their markets less competitive (decreasing the number of firms, increasing their size, forming cartels), creating legal or political barriers to entry, making substitution hard, making your suppliers dependent, and locking your customers into your product or service. If you can’t do these things, Porter’s framework encourages you to pick up your chips, get out of the market and find one where you can make unusually good returns.

This is an insightful model, and it is attractive to realist managers. But there’s nothing about ethics or sustainability here. The model doesn’t consider the long-term reputation or outcome for firms that increasingly become despised for their anticompetitive strategies, as with Standard Oil in the early 1900s, Microsoft in the 1990s or many cable and telecommunications companies today. Such firms are often punished later by defecting customers with good memories, as soon as they gain the freedom to do so.  Balancing good short-term oriented models like Five Forces with long-term models like Triple Bottom Line value production offers a more complete understanding of the conflicting goals of modern firms.