According to leadership scholar John Kotter, 70% of “major change efforts” in organizations fail. I’m not sure how he defines such efforts, but the number seems to fit with general experience. Kotter argues this is because most leaders do not employ a sufficiently rigorous and holistic set of steps in change management, and thus cannot overcome large personal and organizational inertia to resist change. When Kotter proposed an eight-step model for effective change management in Leading Change (1996), it quickly became popular in the US. A 2005 review of change management models by Rune By notes that there a few other popular models, including Rosabeth Moss Kanter’s ten step model (1992), and Richard Leucke’s seven-step model (2003). Evidence grounding any change management model is today slim, but all agree that the rate of organizational change, and the need for change management continues to accelerate. Kotter has recently set up Kotter International to offer change management consulting. Kotter’s eight-step cycle must be traveled many times during a major change initiative, beginning with opinion leaders and early adopters, who model the change for others. The entire process can take many years in a large organization. 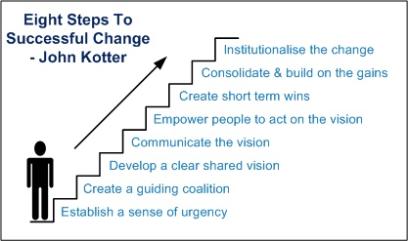 In recognition of corporate life cycles (discussed later in this chapter), Kotter also proposes that organizations begin their lives as malleable, flat networks (which he calls “networks”) and with time and revenue they eventually harden into “hierarchies” (technically, hierarchical networks).  The more hierarchy exists in a network, the harder it is to make structural change. People fight to keep their power and silos, and to keep doing what they know, even when their priorities and practices have become maladaptive for the organization. Katzenbach and Harshak’s “Stop Blaming Your Culture,” Strategy+Business (2011), also describes this problem, and a way out of change-averse cultures, which requires empowering those who are models of the change you desire. Doing fundamental strategy and organizational change effectively in large organizations is hard, but not impossible. Having the right models to guide your strategy and action cycles will certainly be an important determinant of your success.