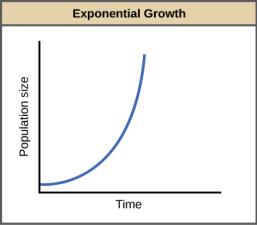 Exponential growth, which we can call E-curves in reference to its name, happens in any system where growth is proportional, at a constant percentage growth rate, to the current quantity on hand. By comparison to linear growth, which has a constant slope, exponential growth produces a curve with a constant upward bend (figure at right). The degree of bend in the E-curve is dependent on the size of the periodic growth rate, and the shortness of the periods. Importantly, there is no “knee” (place where the curve suddenly gets steeper or flatter in growth) in E-curves. A famous E-curve is the initial phase of bacterial population growth in a resource-plentiful environment. Before they run into competition or resource limits, bacteria will engage in an exponential growth phase, where their population doubles anywhere from 12 minutes to 24 hours, depending on their environment. As we will see, this kind of growth can also happen for long periods in economic, technological, and social processes. Predicting how long exponential growth will continue, in any change process relevant to your business, is of course a key question for business strategy.

Economic growth is one good example of exponential growth. In the last decade, the economists at MeasuringWorth estimate we’ve seen a roughly 3% GDP growth per year in the US and a rough average of 9% in China. Why do we see exponential GDP growth every year in any nation, when classical economic theory (in particular, the efficient-market hypothesis) tells us we should expect no annual growth? And why are some nations’ E-curves (say, China and some other emerging nations vs the US) so much steeper than others?

In the late 1950’s economists Robert Solow and Trevor Swan shed some light on this question in their new productivity growth model. Since the days of Adam Smith, economic theory had focused on labor productivity as the key source of wealth. They added two more factors, finance productivity and technical productivity, which offered a better definition of wealth, work for which they received a Nobel prize in 1987.

To my knowledge, this model was the first time that economists began to formally understand that technological progress is by far the most important contribution to wealth in an Information Age. By the late 1990’s one popular version of the Solow-Swan model assigned roughly 70%, 20%, and 10% shares to Technical, Labor, and Finance productivity respectively. Until I find a more current and validated model, I will continue to cite this 70/20/10 ratio as the best first approximation for the value of each of these factors as contributions to economic wealth.

Then in 1988, Paul Romer introduced endogenous growth theory, a model that for the first time, treated scientific and technical knowledge and innovation as endogenous factors central to wealth growth. Up to that point, even under Solow-Swan, they’d been treated as external factors. I took micro and macro economics at both UCLA and UC Berkeley in the early 1980’s and considered both ridiculously primitive at the time, ignorant of the factors of innovation, and of course, technological acceleration. But by the early 1990s, economics finally grew sophisticated enough to begin to model these subjects, and became more usefully predictive.

Romer’s model, for example, was among the first able to predict that public policy, such as subsidies for scientific research and incentives for innovation, can greatly influence economic growth in an industrialized economy. For the first time, some economists even began to understand that the growth of useful information, or knowledge, is its own source of wealth. As information creation accelerates, so too must wealth, in some causal and multifactorial way. Yet most economists will argue over this obvious point even today, and few know how to model it.

Economic theory, by and large, still doesn’t adequately model the dominant and accelerating contributions of science, technology, and information to wealth, but since Romer, real progress is now being made every year. See Brynjolfsson and McAfee’s The Second Machine Age (2014) for a good overview of some of the better economic work in that regard.

The Rule of 72 (72 divided by the growth percentage) is a useful way to convert between the number of years required to double the value of an exponentially growing quantity and its annual growth rate as a mental approximation.  In the example above, we would need 72/3 = 24 years to double the GDP of the US economy, and 72/9 = 8 years to double the size of China’s economy, as long as these growth rates continue. Conversely, if you know the current doubling time in years of any economic, technological, or social process, dividing it into 72 will give you an estimate of its annual growth rate. (When you need to be more accurate, use a CAGR calculator). 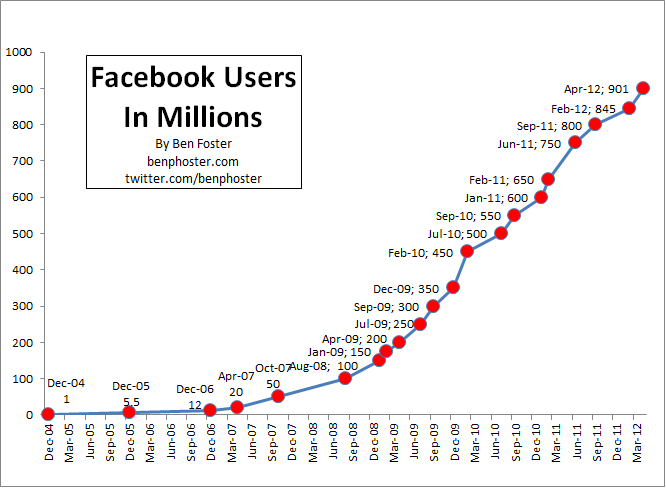 We also see exponential growth at first in many social, business, and technological processes. Exponential growth rates can be particularly fast in software product adoption, viral marketing, and other network-aided processes. In Ben Foster’s graph left, we see Facebook’s user growth doubling rate was 4-6 months from 12 to 50 million users, 10-12 months from 50 to 450 million, and 26 months for the last doubling to 900 million. It will be slower for the next doubling, as Facebook begins to run out of easily available online users, and eventually, people. Nevertheless, a series of exponential growth modes makes a good model for many kinds of online growth processes, particularly at first. 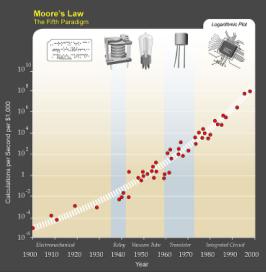 Moore’s law is the most famous example of an exponential technology performance growth curve. Since the 1960s, performance available per price in computing capacity and memory storage for computer chips (integrated circuits) has been doubling roughly every 24 months. That is an annual capacity per dollar growth of around 36% (72/2). It is quite amazing that computing capacity growth has remained exponential for so long. In his visionary technology futures book, The Age of Spiritual Machines (1999), inventor and technology futurist Ray Kurzweil extrapolates this exponential price-performance growth in computing back through five generations of manufacturing technology, showing that in the early 1900s, mechanical computers were doubling in performance per dollar every three years, and by the end of the 20th century computers based on today’s integrated circuits were doubling capacity in less than 24 months. At right is one of his curves. This is actually a gently superexponential capacity growth (shrinking doubling times, which causes a gentle upward curve on a logarithmic plot), a topic we will consider next. But it is close enough to exponential that most observers simply call it exponential growth. 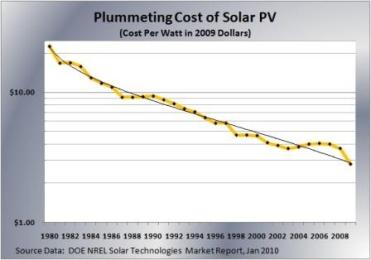 Consider also an example from energy nanotechnology, solar photovoltaic (PV) chips. As futurist and science fiction author Ramez Naam shows, a “Solar Moore’s Law” has existed since 1980. There has been an annual average 7% reduction in the dollars per Watt of solar PV cells, excluding installation costs, giving a performance doubling time of roughly ten years (72/7) since then. Plotting an exponential curve on a logarithmic scale (the X-axis) converts an exponential process into a straight line. As you can see in Naam’s figure at right, solar PV capacity performance has on average followed a nearly straight line on a log scale. As a result, the price per watt of solar modules has dropped from $22 in 1980 to under $3 today. Should this kind of growth continue to at least 2030, as Naam expects, we’ll see two more halvings of the price per watt, taking us to something like 75 cents per watt. This exponential curve has obvious long term importance to energy foresight.

As we’ve mentioned, Singularity University is one of a presently small group of organizations focused on teaching Exponential Thinking. Their faculty outline the rapid exponential growth rates of adoption and performance of various technologies, and ask their students to consider the opportunities and dangers those technologies may create, and ways to create disruptive new products and services. Teaching a student or client to internalize the implications of exponential technological change can be difficult, as we tend to think about the future in linear terms, as Singularity University co-founder Ray Kurzweil notes in The Law of Accelerating Returns (2001), and SU founding Executive Director Salim Ismail describes in his new book, Exponential Organizations (2014).

As important as exponential and other technology performance curves are, they are curiously understudied at present. There is no academic or other institution researching them formally and there are just a few hundred good papers on them in the academic literature. A small group at the Santa Fe Institute, led by technology forecaster Bela Nagy, started a Performance Curve Database to collect better industry data for historical exponential performance improvement in various technologies, but it was not able to find outside funding and so is on hiatus at present.

A great place to start applying exponential thinking in your organization is John Hagel et al.’s report, From Exponential Technologies to Exponential Innovation (2013), from Deloitte’s Center for the Edge. Their report highlights three core digital technologies (a subset of nano and info technologies) that have each seen many decades of very fast exponential growth in price-performance: computing power, information storage, and bandwidth technologies. Their current rapid rate of growth is expected to continue for the foreseeable future.

This Deloitte consulting group asks their clients to consider how those curves will interact with other business, social, and technology growth processes to cause disruption in their industries, and change the nature of competition. They ask them to recognize the “opportunity gap” between exponentially improving technologies and the much flatter labor productivity growth curves in their organization. Clients are also challenged to re-engineer their firm’s learning, foresight, innovation, and performance improvement processes to take advantage of these and other particularly rapid exponential growth curves.