Timing is often critical, in business and in life. It usually isn’t enough to be right, as a forecaster or entrepreneur. You also need to be right at the right time.

Clear view bias happens when the foresighter “mistakes a clear view for a short distance“. The clear view doesn’t overstate what is possible (hype), it just significantly underestimates the time and preconditions that will be necessary for the future vision to finally emerge. Clear view bias may be more common among polymaths, as they can often see farther ahead than the average person. But if they don’t see all the gating factors and preconditions for their vision, they get their timing wrong. Let’s consider a few examples.

In the 1970’s, US President Carter put solar panels on the White House. President Reagan took them down in the 1980s. That was a regressive act on his part, motivated by his alliance with the fossil fuel lobby, but it was also a predictable one, given his politics. Solar energy was in need of R&D dollars in the 1970s and 80’s. It wasn’t ready for mass deployment. Consumer solar panel deployments could have emerged in the early 1990s, if we’d had good leadership and investment on them from Reagan and others in the 1980s, but we didn’t get that, due to political realities. But politics can only delay developmental trends, it can’t prevent them. We finally saw mass solar emerge in the mid 2000’s, with companies like Solar City. Ten years later, solar energy is finally beating coal for electricity production in a few countries, like the UK. But in the 1970’s, solar energy’s timing was too early.

In the 1980’s, there was significant hype in the IT industry around nonvolatile, solid-state “bubble” memory and its potential in hard disk drives. Bubble memory found use in niche products, but it had serious speed and cost of manufacture limitations. Solid-state drives (SSDs) based on flash memory only started emerging in the 1990s, and they only got inexpensive in the 2000’s. Nonvolatile memory’s timing was too early.

In the 1970s to 1990s, there were many predictions of a coming “checkless” society and “paperless” office, around the corner. But the writing of paper checks and the printing of paper in offices both kept growing through these decades, with both finally peaking in the early 2000s. The reduction of paper use has been attributed mainly to a generation shift, and steadily growing sustainability values. Older folks change their behavior a lot slower than we think. This is another good example of clear view bias, of much too early timing of an obvious future ahead.

In the mid-1990s, Oracle, Sun, and IBM promoted the idea of the diskless “network computer” as the future of laptops and PCs. Network computers were manufactured between 1996 and 2000. But home internet connections were still at dialup speeds, cloud services didn’t exist, and hard-drive based laptops continued to get exponentially cheaper. Network-like computers finally became popular with Google’s Chromebooks, which began selling in 2011. These devices do have SSDs, but many users keep all their files in the cloud, as in the network computer vision. This is another example of clear view bias that was fifteen years too early. 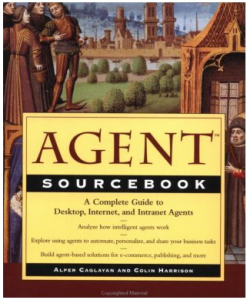 Caglayan and Harrison (1997). A great early book on software agents.

In the late 1990s, a number of folks were talking about the great promise of software agents. Harrison and Caglayan’s Agent Sourcebook (1997) is a great example. It documents the broad range of simple agents available at the time. But agents smart enough to start anticipating our needs, conversationally, didn’t arrive broadly, even in a very limited sense until Apple’s Siri in 2011, and it wasn’t until 2015 that we began to see broad numbers of simple agents and bots. These are still a long way from being truly smart agents, able to manage complex semantic functions for us, and their personalization is still a long way from personal AIs. Amazon’s, Google’s, Microsoft’s and Samsung’s 2016 prototype conversational assistants are nice, but I’d bet we’re still at least five years away (2021) from mass use of smart agents, and broadly useful basic conversational abilities, and we are probably ten years away (2025) from the broad use of personal AIs. A lot more progress in AI is still needed before these emerge. Again, it’s easy to mistake a clear view for a short distance.

The polymath and futurist Ray Kurzweil demonstrates clear view bias in his views on the timing of the technological singularity, in my opinion. He originally predicted general artificial intelligence arriving in 2045. In his more recent thinking, he’s moved this date even sooner. In my first article on this topic in 1999 on SingularityWatch (now AccelerationWatch), I also guessed the 2040’s might be the correct timing. But the closer I looked at the brain-inspired technologies that I felt had to be central to general AI, the further out my prediction has moved. I’m now expecting general AI to arrive around 2060.

I think that time frame allows an adequate buffer for two things: all the hidden complexity we are missing in our current understanding of intelligence (for example, the use of evolutionary and developmental programming to capture the way life improves its own intelligence) and for all the social gating effects that will slow down the emergence of this potentially very disruptive new force in society. The closer it gets to human level, the more creeped out many of us will become, and the regulators will gain more influence the more powerful AI becomes, especially after minor or major AI disasters.

The polymath and futurist Eric Drexler also demonstrates clear view bias in his views on molecular nanotechnology, in my view. I am sure the molecular assemblers that he describes in his intellectually thrilling books will inevitably happen, but I’m also convinced they will arrive much later than he thinks, due to the need for a technological singularity beforehand. Only an AI, in my view, will be able to conduct the vast number of experiments in simulation space that will be necessary to rediscover, and further optimize, the molecular nanotechnology that biological systems use, and from there, learn how to apply it in even more productive, and perhaps less “wet” environments. So with the exception of the computational nanotechnology that will help create our coming natural computing paradigm, most of Drexler’s vision can arrive only late in the 21st century, in my view.